Guest lecture David Maxwell: “Missions and the State in Colonial Belgian Congo: The Challenge of Pentecostalism” 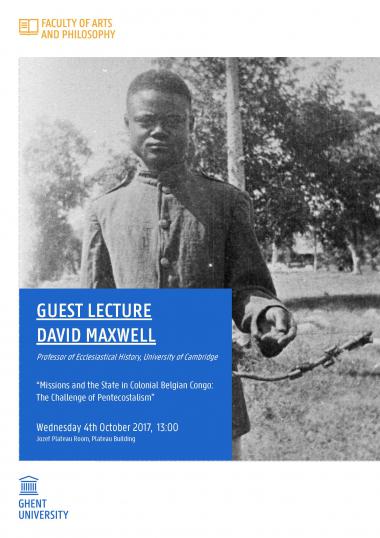 Missions and the State in Colonial Belgian Congo: The Challenge of Pentecostalism

David Maxwell’s paper considers the tensions between the so-called Triumvirate of Church, Administration and Capital in the Belgian Congo, in order to examine colonial
rule as a religious construct. It explores how missions occupied territory and organised colonialism on the ground via indirect rule; how they provided symbolic legitimation; and how they contributed to creating disciplined workers. This functioning arrangement between the triad of interests was unsettled by the arrival of ecstatic Pentecostal Christianity. In the colonial archive, files detailing the activities of new Pentecostal missions and related movements of Christian independency are more ubiquitous than those on the historic mission churches, both Catholics and Non-Conformists such as Presbyterians, Methodists and Baptists. These movements of healing, exorcism and ecstatic utterance eschewed supposedly modernising aspects of Belgian colonialism and exposed its reliance on archaic formulations of custom. They thereby caused much consternation amongst officials anxious to defend their project.

By focussing on official reaction to Pentecostal movements, the paper expands understandings of Belgian Congo as a ‘nervous state’. This category of analysis, developed in response to emic concepts by Nancy Hunt, seeks to reconstruct the interplay of violence, medicine and reverie in the history of the colony. By paying attention to the moods of administrative officers, their collaborators and subjects, it
sheds light on the disorderly, jittery nature of the state. In their response to movements of divine healing and exuberant worship we see unnerved officials fearful for the future of the social and symbolic order of the colonial regime.